Frank and Jeanmarie, the main characters of “The Dwarf in China”, have taken up a new adventure in the city of Chengdu, capital of Sichuan province. They performed their dwarf show in kindergartens from March 10th until April 10th 2015. Frank & Jeanmarie will write about this period on this blog. Read bottom posts first to read in chronological order!

Thoughts of Jeanmarie 3
Early saturday morning, after two weeks of touring in Chengdu, we took off for a two days trip  in the middle of a high mountain area inside  the province of Sichuan.
We picked up my son Tim, who flew over to join us on this expedition that proved to be just as short as surprising. Yang Xiao had chosen a small village of a Tibetan minority of Qiang people where we would combine a dwarf performance for the locals with a one day mountain hike between two and four thousand meter. Little did I know before hand how well he had selected this time and place, until we got there: the most harmonious settlement of humans in the purest environment of nature, I have ever seen. I felt a wonderful sensation of release as soon as we got there. 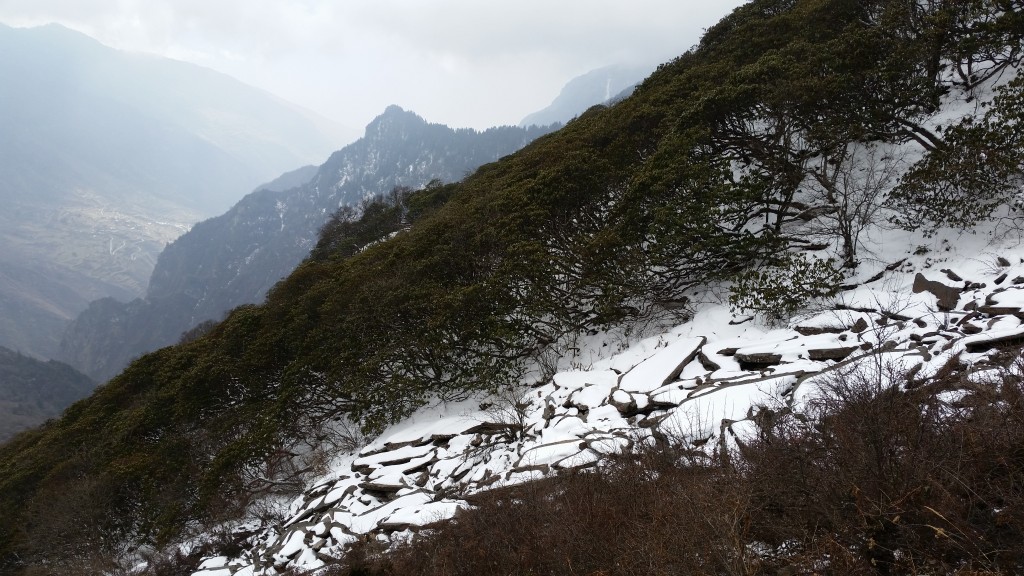 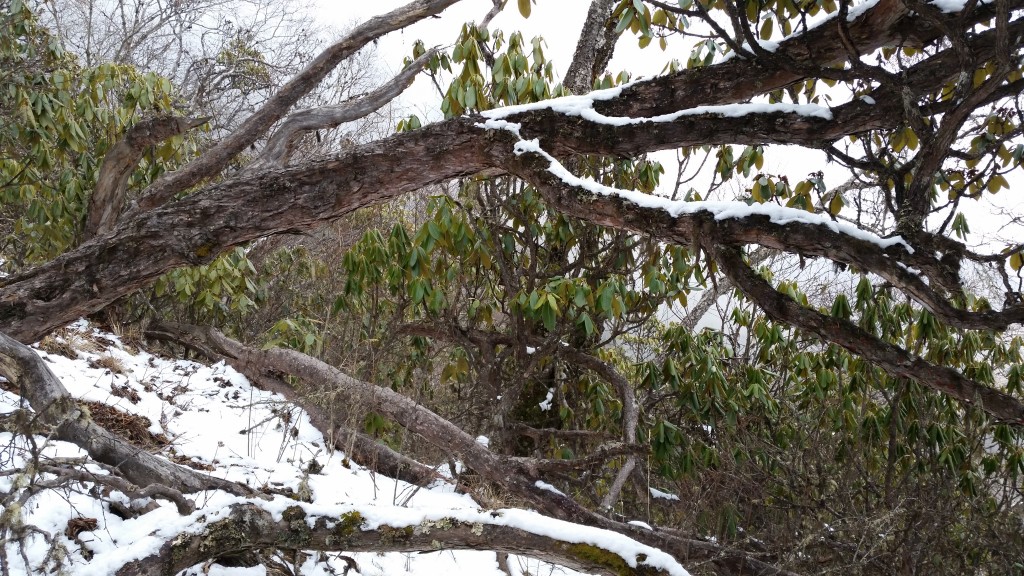 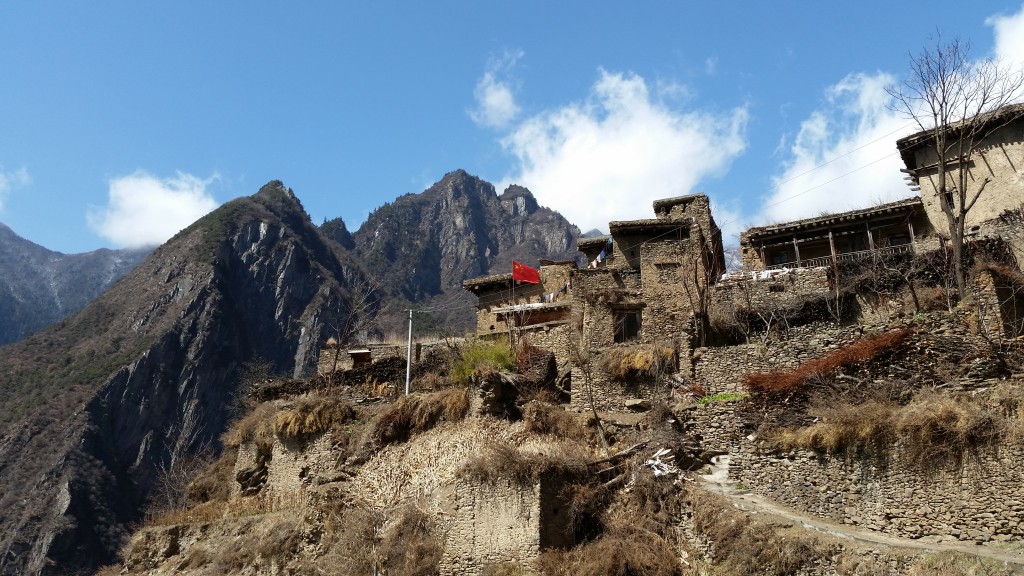 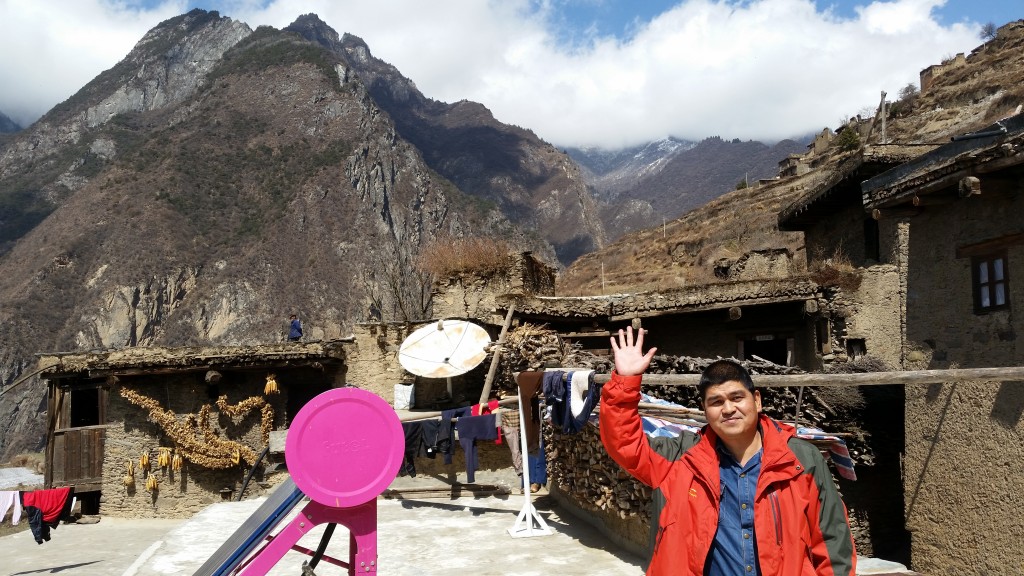 We arrived  in the early afternoon  and drove back at the end of the next day. By that time my body was exhausted from the hike and had left me with knees so tired  that I wondered if I would recuperate quick enough to perform the dwarf again on the monday morning, when we were to go back again into the densely populated urban environment of Chengdu to continue our tour around kindergartens. But my heart was filled with gratitude for what had happened right after the performance on the night before:
Inspired by the purest of joy that the dwarf had generated in this most remarkable community , the people of the village started dancing and singing around in a spontaneous and genuine mood for celebration like I never witnessed before.

I could hardly believe my eyes and ears when I was gathering my props right after the show, while the audience was chanting and dancing in circles, on that small place that we had chosen to gather for this spring celebration. Cause a spring celebration it was. I realised just then that by some magic touch of coincidence the timing of this event had been perfect. We happened to be with these beautifull people on the evening of the twenty first of march! 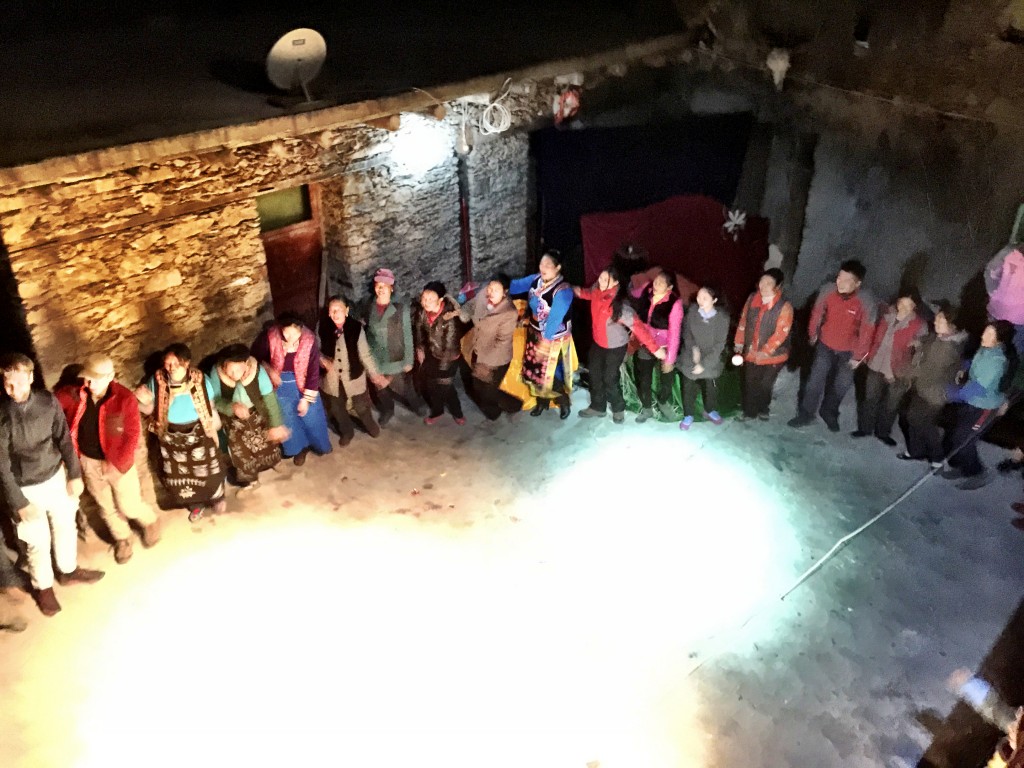 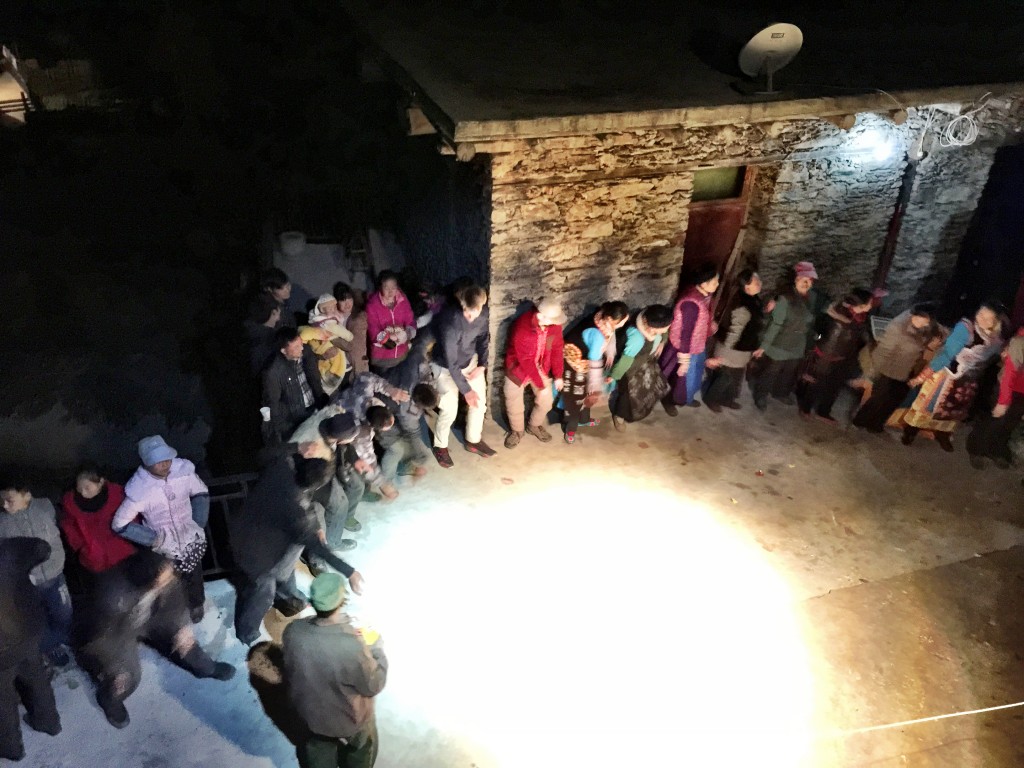 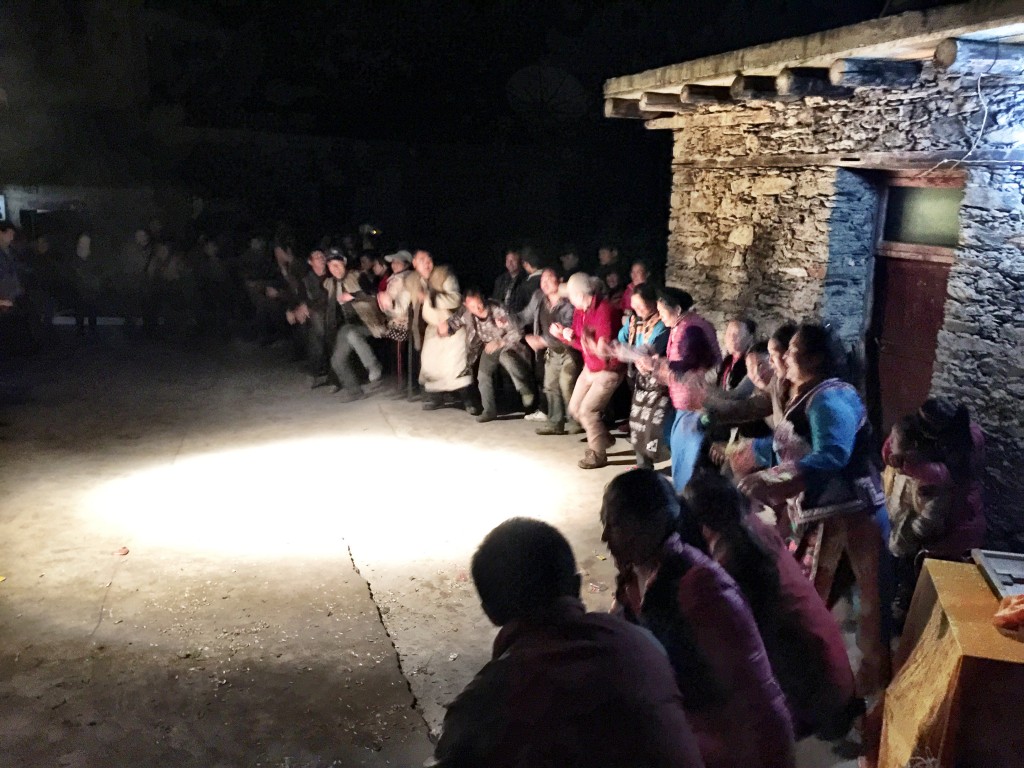 The Qiang People dancing their traditional dance after the dwarf performance

Without exaggeration I can say that an old dream of mine had come true in the most splendid way I had ever experienced.
Ever since i started my life as a clown, I had dreamt of the possibility of using my performance as an opportunity to celebrate life, the way this used to be done in the old days, when festivals were created around the natural birthdays and nights of spring, summer, autumn and winter times. During my 35 years of clowning i had noticed how gigs that happened on spring equinox days could have a special quality. Studying the old traditions of season-related festivities I came to understand that these moments were blessed with a powerful potential to reinforce the bonding of humans and nature, through the joy of sharing music, dance, theatrical rituals, drinks and food. Within the language of esoterical science I treasure, these moments are named “cardinal feasts”, four of them unfolding each year……

And here it happened! Without me having planned it as such. But more joyful then I have ever felt before. What a joke……In the beginning of the documentary, Frank speaks about how one day in Thailand he runs into some oriental fakir like person who predicts how in the future he was bound to get together with someone of the age of his parents, to cooperate in the realisation of dreams that were waiting to unfold. And here this prophesy did materialize…………….La vie fait vraiment très bien les choses!

It is true that when I returned home after a month of hard work in China, I had no more  money then I had when I left this place. It is true that my bills had not stopped falling on my desk. It is also true, that I have spent almost a month to recuperate from a sever back problem from going around on my knees, like i never did before ……..But this experience with those Qiang people is a treasure that fills my heart, like money will never be able to do.

And I am forever grateful to Yang Xiao, Frank and all the people in this mountain village.